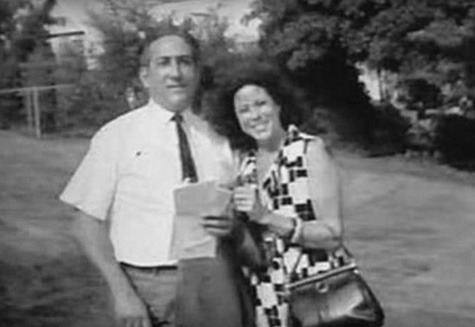 Leno LaBianca was a grocery store owner, and Rosemary was also a successful business woman. They lived in the Los Angeles suburb of Los Feliz.

Leno LaBianca and his wife Rosemary LaBianca were victims of the Charles Manson murders. Leno was a grocery store owner, and Rosemary was also a successful business woman. They lived in the Los Angeles suburb of Los Feliz.

On August 9, 1969, they had vacationed for the day at Lake Isabella, and returned home the night following the Sharon Tate murders. They were last seen alive when they stopped on their way home to buy fuel. Rosemary also bought a newspaper, its front page detailing the murders on Cielo Drive at Roman Polanski’s Beverly Hills residence. The attendant testified later that Rosemary particularly had been very concerned and anxious as she read about the murders and briefly discussed this with the attendant.

The following night, on August 10, 1969, Rosemary’s 15 year old son Frank Struthers became concerned when neither his mother or step father answered the door. After contacting his older sister Suzanne Struthers and her boyfriend, the three, upon arriving at the home, became further worried by the fact that Leno’s boat was parked on the street instead of the driveway. They felt this to be out of Leno’s character, and entered the house. Inside the kitchen they saw the words “Healter Skelter” [misspelling] written in what appeared to be blood on the front of the refrigerator. In the living room they found Leno, bound and gagged, and stabbed to death. Rosemary was found, also stabbed to death, in the master bedroom.

Charles Manson, Charles ‘Tex’ Watson, Patricia Krenwinkel and Leslie Van Houten were charged with these murders after a lengthy investigation. Susan Atkins, charged with the Tate murders, provided testimony before a Grand Jury. Her testimony, borne out by police investigations and corroborated by other “Family” members, stated that Manson had been critical of the way in the which the Cielo Drive murders had been carried out. The people were allowed to know they were to be murdered and this resulted in panic. He took personal charge of setting up the murders the following night, to ensure the victims would be easily restrained and compliant, and that there would be no panic.

Driving to Los Angeles, he stopped at several houses before considering each in turn to be unsuitable. Remembering a house in Los Feliz, where he had attended parties, he recalled that a neighboring house was somewhat isolated from the rest of the neighborhood. He directed Watson to drive there, and entered the house himself. He assured the two occupants that they were to be robbed but not harmed, and tied them up. He then came back to the remaining “Family” members waiting outside.

In his autobiography, Charles “Tex” Watson stated that having gone up alone, Manson returned to take him up to the house with him. After Manson pointed out a sleeping man through a window, the two of them entered through the unlocked back door. As Watson related it, Manson roused the sleeping Leno LaBianca from the couch at gunpoint and had Watson bind his hands with a leather thong. After Rosemary was brought briefly into the living room from the bedroom, Watson followed Manson’s instructions to cover the couple’s heads with pillowcases. He bound these in place with lamp cords. Manson left, sending Krenwinkel and Leslie Van Houten into the house with instructions that the couple be killed.

Before leaving Spahn Ranch, Watson had complained to Manson of the inadequacy of the previous night’s weapons. Now, sending the women from the kitchen to the bedroom, to which Rosemary LaBianca had been returned, he went to the living room and began stabbing Leno LaBianca with a chrome-plated bayonet. The first thrust went into the Leno’s throat.

Sounds of a scuffle in the bedroom drew Watson there to discover Mrs. LaBianca keeping the women at bay by swinging the lamp tied to her neck. After subduing her with several stabs of the bayonet, he returned to the living room and resumed attacking Leno, whom he stabbed a total of twelve times with the bayonet. When he had finished, Watson carved “WAR” on the man’s exposed abdomen.

Returning to the bedroom, Watson found Krenwinkel stabbing Rosemary LaBianca with a knife from the LaBianca kitchen. Heeding Manson’s instruction to make sure each of the women played a part, Watson told Van Houten to stab Mrs. LaBianca too. She did, stabbing her approximately sixteen times in the back and the exposed buttocks. At trial, Van Houten would claim, uncertainly, that Rosemary LaBianca was dead when she stabbed her. Evidence showed that many of Mrs. LaBianca’s 41 stab wounds had, in fact, been inflicted post-mortem.

While Watson cleaned off the bayonet and showered, Krenwinkel wrote “Rise” and “Death to pigs” on the walls and “Healter Skelter” on the refrigerator door, all in LaBianca blood. She gave Leno LaBianca fourteen puncture wounds with an ivory-handled, two-tined carving fork, which she left jutting out of his stomach. She also planted a steak knife in his throat.

Manson, Watson, Krenwinkel and Van Houten were found guilty of these murders. Van Houten was not charged in connection to the Tate murders, but the remaining defendants, along with Susan Atkins (who had not entered the LaBianca residence) were found guilty of the Tate murders. Each received a death sentence, but this was commuted to life in prison for each person, when the State of California temporarily abolished the death penalty.

Discuss this topic in the new Labiana forum.