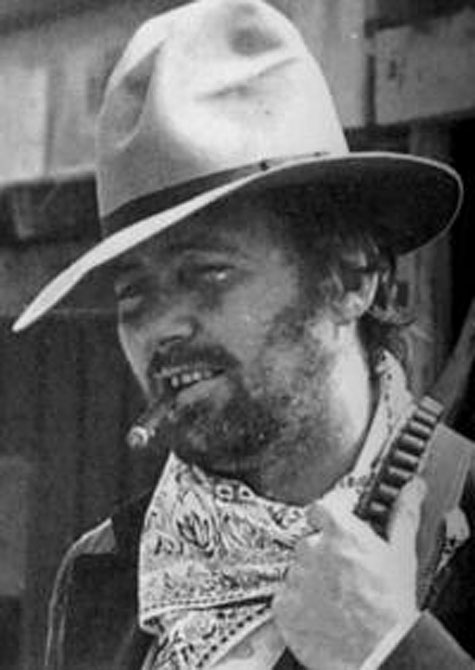 Shorty Shea was a Spahn Ranch stunt man and horse wrangler who was killed approximately 10 days after the August 16, 1969 raid on the ranch.

Donald “Shorty” Shea was born on September 18, 1933 in Medford, Massachusetts at the Lawrence Memorial Hospital. He later moved to California, like many others, with aspirations of becoming a movie star. He found that it was going to be more difficult than he expected. While he would score some small acting gigs here and there, the most reliable work would be at Spahn Ranch where he worked as a horse wrangler. Shea drove a 1962 White Mercury Comet, License NLM 841.

Shea was  six foot two and had a stocky build. For a short time he worked as a bouncer and most considered him the foreman of the ranch who pretty much directed the other ranch workers. However not so much when it came to Manson and his crew. Shea could tell that Manson didn’t like him, and the two didn’t get along.

One of the reasons Manson disliked Shorty was obvious: he hated authority of any kind. However for Manson, even worse was that Donald had been in a relationship with a black woman named Magdalene Velma Fuery, a topless dancer also known as Nicki, who for a short time also stayed at the ranch. The two married in Las Vegas. Charlie despised Shea for the relationship.

The animosity grew and Shea began to comment to Ranch owner George Spahn that he didn’t care much for the Manson group. That they were up to no good and should move on to another place. But old George Spahn was enjoying the company of the Manson girls, and looked the other way despite Shorty’s complaints.

On August 16, 1969, LASO raided the ranch. They had discovered there were stolen vehicles on the property and about 100 officers arrived in the early morning hours catching everyone off guard. This was at the time the largest raid in LASO history. Manson suspected that Shea helped set up the raid, and believed Shea was trying to run the Family off the ranch. Shea was murdered about ten days later.

“Well, it was like a growing hostility. They didn’t like him. Charlie didn’t like him because he was – he was always drinking, and he thought he was a slob.” – Steve “Clem” Grogan

Charles Manson and family members Steve “Clem” Grogan and Bruce Davis were eventually convicted of the murder although Tex Watson and Bill Vance were also participants. Furthermore in one of Bruce Davis’s recent parole hearings he claimed Larry Bailey was present as well although the youngster remained terrified throughout and didn’t participate in the actual killing. After Shea’s murder, the Family burned and buried his belongings to keep the murder a secret. Grogan is said to have buried the body himself.

The location of his body was not discovered until December 1977, nearly a decade after Shea’s death. Grogan agreed to aid authorities in the recovery by drawing a map to its location. Shea’s skeletal remains were discovered on a hillside near Santa Susana Road next to Spahn Ranch.

While at Spahn Ranch, Straight Satan Motorcycle Club member Al Springer was reading a newspaper clipping with Bruce Davis. It was about the Bobby Beausoleil trial where Danny DeCarlo, another Straight Satan member, had testified. Springer said he did not like the idea of DeCarlo testifying. Davis then said, “

Yes. We’ll have to do something about that.”

Springer said, “That would be hard to do.”

Davis replied, “We have a way of taking care of ‘snitches,” and that they had already taken care of one. Then he added, “We cut his arms, legs and head off and buried him on the ranch,” and that, “the guy was a snitch.” Davis added that the guy drank so much they were afraid he was going to the police with information. So they done away with him.

Bruce Davis claims the decision to kill Shea came from Manson. In his parole hearings Davis described the murder of Shea and the events that led up to it. Shea may have learned details about the Tate/Labianca killings and leaked his knowledge to other Family members during the raid on Spahn Ranch that he was aware of it. The one thing that is clear is that Donald Shea was no fan of Charles Manson, and Manson did what needed to be done to get rid of him.

Although Tex Watson was not charged in the Shorty Shea killing, both Davis and Grogan claim that Watson was the first to stab Shea and played a major part in the murder.

Discuss this topic in the new Shorty Shea forum.