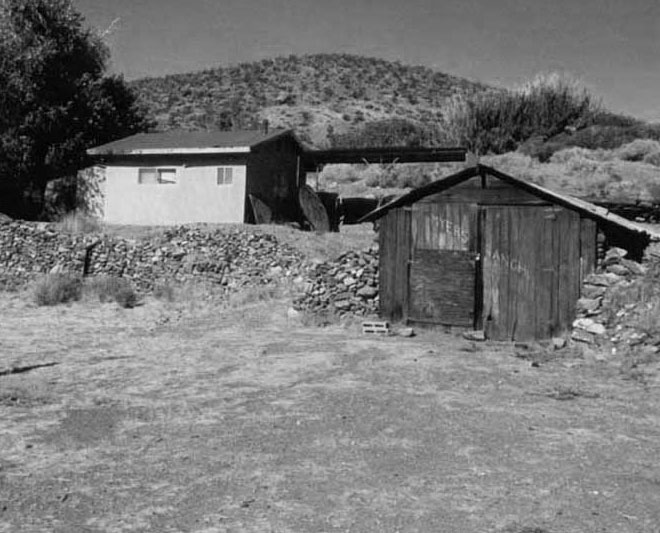 Myers Ranch was badly damaged in a mysterious fire in 1999. The property has been completely reconstructed. Today it remains a private, family-owned retreat.

Myers Ranch is a 40 acre recreational ranch in eastern California just east of Sourdough Springs in Inyo County. The ranch was built in 1932 at a time where uranium mining was common in the California desert, which also provided a sanctuary for those seeking to escape from mainstream society.

The coordinates of Myers Ranch are 35.8616209, -117.082272 and the approximate elevation is 3,389 feet (1,033 meters) above sea level. After the passage of the California Desert Protection Act, the entire area around Myers Ranch became a private in-holding government controlled piece of land within Death Valley National Park.

Myers Ranch was owned by Bill and Barbara Myers who successfully patented the property under the General Mining Act which allowed land owned or controlled by the government to be legally occupied due to an owner’s involvement with small-scale mining. The Myers instead used it as a recreational property until 1960 prior to moving with their children to Fresno California. It is known mostly as one of the hideouts used by the Manson Family in the late 1960s and early 1970s. It is just a half-mile from the more infamous Barker Ranch. Like Barker, Myers was located on General Land Office-administered property.

Charles Manson first learned of the secluded and worn-down Ranch from recently inducted Family member Catherine Gillies, the grandchild of owner Barbara Myers. Cappy, whom the Family nicknamed her, requested permission for herself and a few friends to stay on the ranch since it was empty; she then brought Manson to inspect the property, which he loved for both its seclusion from society and its perceived escape from the eyes of the law. Thereafter, nineteen adults and two children joined them.

Myers Ranch was badly damaged in a mysterious fire in 1999. The property has been completely reconstructed and remains a private, family-owned retreat.