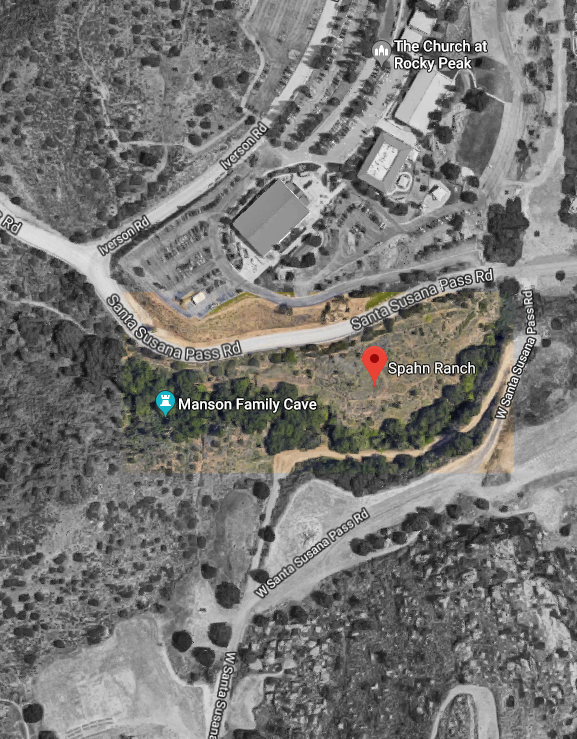 In 1969 Charles Manson and his family of followers lived at the Spahn Movie Ranch in Chatsworth, California. The ranch was a 55-acre movie ranch where old western films such as Bonanza and The Lone Ranger were filmed. It was built in 1947 and purchased by dairy farmer George Spahn in 1953. Today, the ranch part of Santa Susana Pass State Historic Park however, is most known as being the home of the Manson Family during the Tate and Labiana killings in August 1969.

A fire destroyed all of the Ranch’s sets and residential structures on September 26, 1970, however, one portion of the property remains just as it was in 1969 and welcomes hundreds or even thousands of visitors per year from all over the world; the cave known as the Manson Family Picture Cave where a small boulder has “Manson Family Cave” carved into it.

The location is marked on most maps at a Historical Landmark.

If you plan on visiting the cave you should wear something that covers your legs and feet as there is known to be poison oak, poison ivy, tarantulas and rattlesnakes at the site. One visitor at night noted that there was a photo of Charlie and a burning candle inside the cave when they visited.

There are several tour companies that bring visitors to popular Manson spots such as El Coyote Cafe and Cielo Drive but just one that offers private tours to the cave itself which is called Elite Adventure Private Tours.