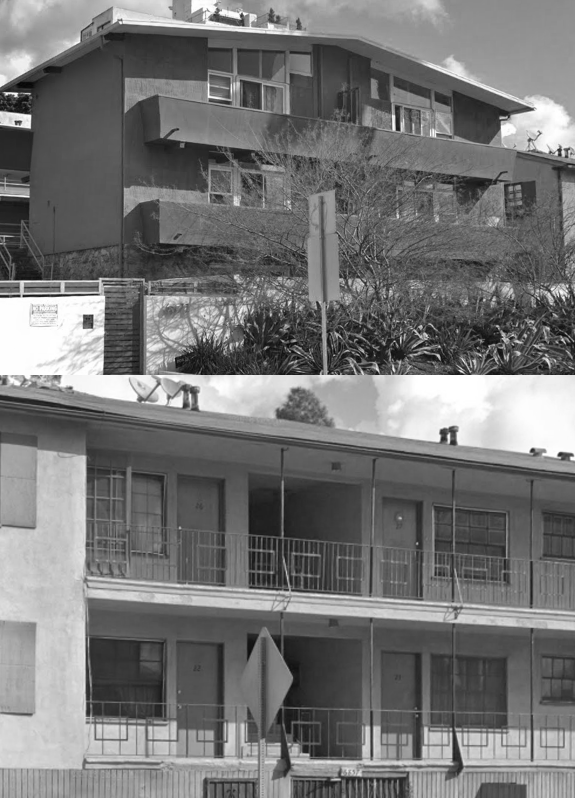 The Franklin Avenue Apartments comes into play for several reasons when it comes to the Manson saga.

The Franklin Avenue Apartment complex comes into play for several reasons when related to the Manson saga; marijuana and cocaine dealer Bernard “Lotsapoppa” Crowe was shot here, Charles Manson lived in the apartments, and Tex Watson lived with his girlfriend Rosina Kroner there.

In 1959 Charles Manson lived at the Franklin Avenue Apartment complex at 6871 Franklin Avenue; this was approximately ten years prior to the Tate Labianca murders. Police records show that after leaving prison, Manson started pimping a 16-year-old girl named Leona in Hollywood. He was arrested twice during his stay there and was running a bogus talent agency called “3 Star Enterprises” from apartment #306 which was actually a front for his prostitution activities. He married Leona so that she could not testify against him as he faced a series of charges and while legally wed, courts couldn’t force her to testify against him.

Ten years later around June 1969, Tex Watson and his girlfriend Rosina Kroner lived in the next building at the Franklin Garden Apartments, 6933 Franklin Avenue. Tex had already been living at Spahn Ranch and would come and go as he pleased between both locations. It was at 6933 Franklin that Charles Manson shot drug dealer Bernard Crowe in the stomach on July 1, 1969, after Tex Watson had stolen $2,500 worth of marijuana from Crowe.

The incident spun out of control when Tex left Crowe with his then x-girlfriend Rosina and took-off with the marijuana not paid for. Crowe called Spahn Ranch threatening that if Tex did not return with his money that he was going to cut up the girl in a bunch of pieces and the entire Family would pay. This is what led to the shooting; Manson went there with another member of the Family, Thomas Walleman, or “TJ” with the intent to negotiate a deal or kill Crowe. Walleman was the intended shooter but chickened out and Charles Manson did the shooting.

According to the book “Manson In His Own Words” the phone rang at Spahn Ranch:

“Charles, you’ve got to come back with the money or the grass. Crowe’s here at my place and says he’s going to kill me if he doesn’t get his money” – Rosina Kroner

At the time of the shooting Manson and Walleman believed they had killed Crowe, whose address was listed as 1900 North Sycamore Avenue, Los Angeles, CA 90068 – this is right around the block from the Franklin Avenue and Franklin Garden Apartments. Bernard “Lotsapoppa” Crowe was soon after transported to the hospital and survived and later testified in the Manson trial.