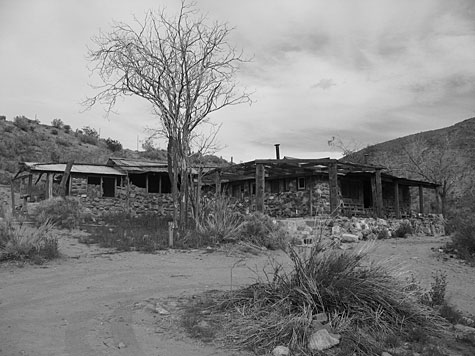 Barker Ranch is infamous as the last hideout of Charles Manson and his “family” after the gruesome Los Angeles murder spree. Today, little remains except for stone walls and concrete slabs.

Barker Ranch is infamous as the last hideout of Charles Manson and his “family” after the gruesome Los Angeles murder spree. It is located inside Death Valley National Park in eastern California.

After the last of the murders took place, the Manson clan left Sphan Ranch having been arrested earlier for leading a car theft ring. Manson and his followers were released due to a botched warrant. At this time authorities had not linked Manson to the killing spree. Manson promised his followers that Barker Ranch as well as nearby Myers Ranch would provide them safe haven from a coming apocalypse where they would emerge as leaders of the new America.

The Barker Ranch was built in the 1930’s by Butch and Helen Thomason. Looking for Gold they left the city to mine in the Panamint Range. Often times homesteaders during the early 20th century would move to the desert for the dry air, solitude, and pleasant winter weather. Sometime during the 1950’s the Thomason’s sold the ranch to Arlene Barker who moved to California from Oklahoma. The Barkers added additional structures to the ranch property. This included a concrete “swimming pool” to catch water, fences, and an array of other comforts.

An older lady, Mrs. Barker rented her ranch to the Manson family who she believed were a group of musicians who needed space to practice. Manson even gave her a Beach Boys gold record (which he had been given by, or stolen from, Dennis Wilson) as thanks for letting them stay there. Manson followers conducted raids in Death Valley stealing dune buggies and vandalizing National Park property. It was these relatively petty crimes, not the murders, that led to the Manson family’s arrest. When a joint force of the Inyo County sheriff department, California Highway Patrol, and National Park Service raided the ranch on October 10 and October 12, 1969 and dragged a crazed Swastika-tattooed man out from under a bathroom vanity, they thought they were nabbing a group of local troublemakers. It soon became clear that the Manson family was much more than that.

In 2008 a search of the site was conducted looking for the remains of additional Manson family victims, long rumored to have been buried by Barker Ranch. Though bullet casings were found, no remains were uncovered and the dig was called off. In 2010 much of the wooden structure of Barker Ranch and the infamous vanity in which Manson hid himself burned down. The stone structures are still standing. Today, little remains except for the stone walls and concrete slabs.