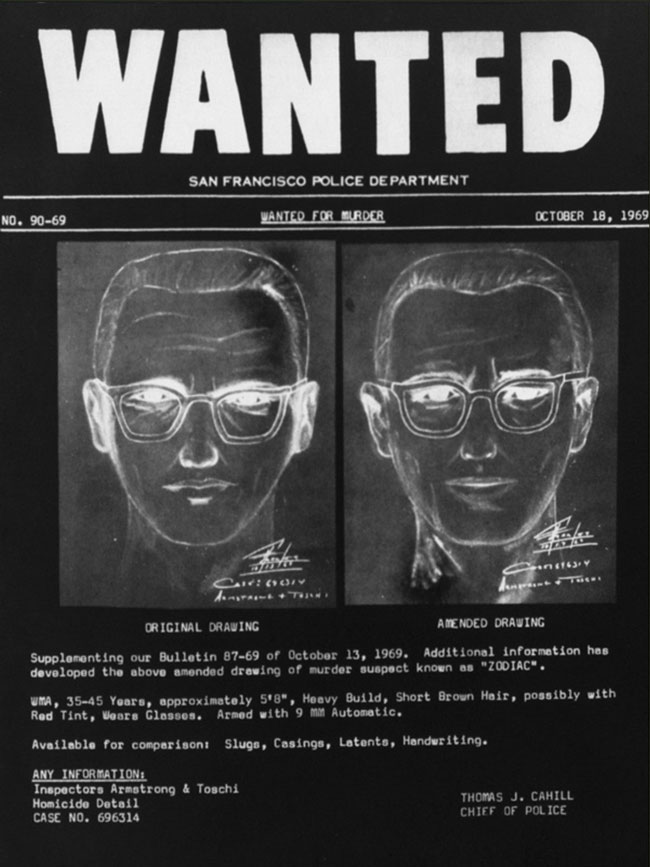 The Zodiac Killer is a still unidentified serial killer who operated in Northern California from at least the late 1960s to the early 1970s. The killer’s identity remains unknown.

Howard Davis, the man behind the Zodiac-Manson conspiracy hoax through his 1997 book titled “The Zodiac / Manson Connection” claimed that a relative of coffee heiress Abigail Folger had hired a private investigator who uncovered evidence that the Manson family was also responsible for the Zodiac crimes. Davis additionally claimed he had received a tip from what he specifically described as a “pristine source” inside the Los Angeles District Attorney’s office that corroborated this and that the original investigation into the Manson murders had indeed uncovered evidence linking at least one of one of the Manson family members to Zodiac.

According to Davis, his “confidential source” also stated that authorities in the Los Angeles District Attorney’s office conspired to conceal this evidence due to a lack of funds and risk to a case involving an already being prosecuted suspect who was intended to receive the death penalty anyway and would never see the light of day and did not want to confuse, complicate or compromise the current case in any way, so the evidence was pushed aside. These revelations where further circulated by another conspiracy theorist named Bill Nelson, author of “Manson: Behind the Scenes”, and notorious for being a “Manson Family Stalker” and claiming to be against people profiting from the crimes. However, Nelson not only sold photos, videos of parole hearings and interviews with Family members, but he wrote a total of two books on the case which earned himself handsome returns.

A third person who furthered these story lines was Tom Voigt, the owner of a Zodiac related website. Tom Voigt and Howard Davis had established a mutually profitable relationship as the topic helped increase interest and web traffic to the site which was self funded via member donations intended to help finance further internet research of the Zodiac crimes. However, speculation on these three aside, Nelson, Davis and Voigt were not the only ones to suspect a connection between the notorious Zodiac crimes and the bizarre slayings of the Manson family. Official documents reveal that investigators assigned to the Zodiac case had already entertained the notion of a possible connection between the two but after investigating the evidence and all of the male members of the Family (including specifically all male voices), were unable to find any link between the attacks ruling out any connection.

Below is the written email sent by Howard Davis in response to pressure related to the validity of his confidential source. In the email Davis finally identified the source of his “tip” as his former brother-in-law. This email furthered many years of the now debunked “Zodiac-Manson Conspiracy” theory:

In 1974 we had a very small family get together… My sharp as a tack brother in law was there. He was Assistant DA for the LA DA’s Office and helped prosecute Manson and others… I clearly remember every detail of our conversation in 1974. He and I were at my dining table chatting and since I was from the N. Bay Area I asked him ‘why he thought Zodiac stopped killing and writing letters, etc. or so it seemed to me as I knew very little about the case. He leaned slightly over towards me and in his usual still and very serious manner told me casually “because he is in prison!'” I said, “how can you know that as the authorities are all looking for him.” He then told me that if I wouldn’t “tell anyone” (while he was with the DA) he would tell me how he knew this ‘secret’ information. I assented. He said that as they ‘were going through the personal effects’ of a “male member of the Manson Family “they found the Zodiac hood, knife and other evidence. He would not go into the other evidence. In short, they had a meeting in which a legal expert on county law and in other legal matters (he was very experienced) told them in a report he had prepared that he estimated it cost “about two million” to send the suspect to North CA to be tried as “Zodiac.”

They had spent just under one million which was a world record for a trial on CM [Charles Manson] and his group. The funds were not there. The Expert told them they could possibly lose him on the two 187’s [murders] they already [had], but barely got him on, in ’71/72 and he could possibly get off in such a liberal climate… as was found in the Bay Area. He mentioned jurisdictional disputes and many other reasons concerning the Z [Zodiac] evidence at that time. After this and other discussions they decided to suppress what they had found and knew. They took the Expert’s advice into conservation too. DA Younger knew of these matters. Bugliosi, Stovitz and others knew nothing of this, but in conversation Bugliosi has come to believe that a CM [Charles Manson] /BD [Bruce Davis] connection to Z [Zodiac] is possible. He has written wishing me luck in uncovering the Z [Zodiac] case. My brother in law then told me that “We have it set so that he can never get out.”

He also indicated that girlfriends and wives were very tired of the CM [Charles Manson] case in that their men were all working very long hours and they were all burned out and to think of going through an experience such as was given would be even more difficult. This was the last consideration. They felt they had this guy in for good now and that any penalty would be the same or life in prison so they did what they did. I did not and do not agree, but it was them not me that did it. I had the impression that they didn’t really care for the North CA authorities either. That was MY impression based on the way he spoke of them. I am cutting out a lot to make this terse as possible, but this is the essence of the discussion we had. We were always able to get along… I have always been very willing to take a lie detector test as to what I have recounted. It is the truth. At my request my ex wife asked him just before he left the DOJ about Zodiac and our talk in ’74. He denied he even knew who Z [Zodiac] was or anything about the case. Of course, she knew that he was familiar with the Z [Zodiac] case. As she was walking away he said in a fairly firm voice,’ Kris, “I know” all the other suspects – except the one he gave me- are not Zodiac or “fake.”

The Zodiac-Manson Conspiracy theory, a book which Nelson claimed was backed by over 14 years of intense research, was mentioned on America’s Most Wanted.