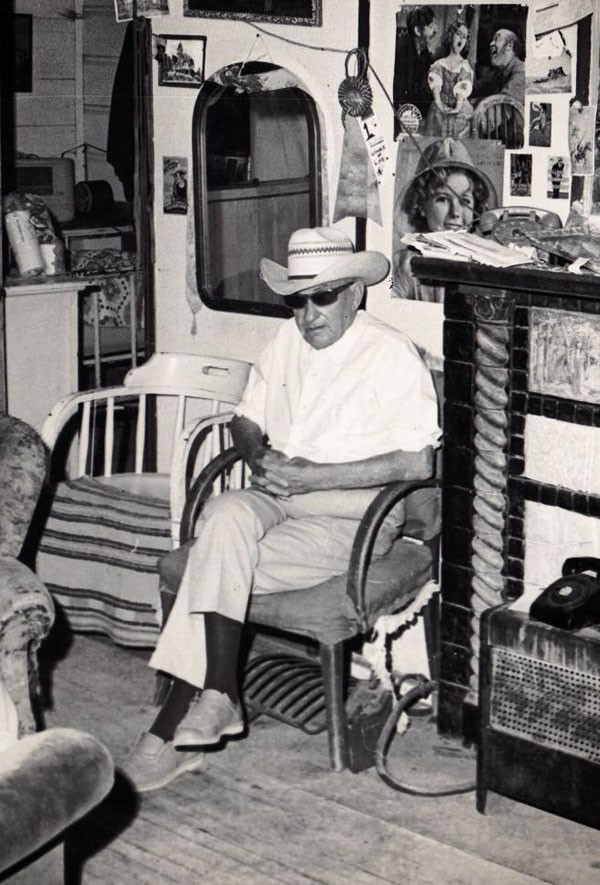 George Spahn, owner of the Spahn Ranch property which was home to the Manson family

George Spahn was born on February 11, 1889 in Chestnut Hill, Pennsylvania. He was the owner of the Spahn Ranch which he purchased in 1953 after leaving his successful milk business in Willow Grove, Pennsylvania; he had grown his enterprise there to thirty-five cows, five wagons and seven houses before hearing of greener pastures and better weather in the Southwest. He packed up his furniture and hit the road with his wife and 11 children moving to California.

When George Spahn arrived on the California scene he continued in the livestock trade. After a few years his livestock and riding stables businesses thrived. He added children’s pony rides, horse riding stables and areas for carnivals to rent. At this point his relationship with his wife began to suffer and the pair split with his wife moving away taking along his ten children.

However, Spahn continued to prosper and soon found himself with a new companion, a young and bubbly red-head girl friend – a carnival worker named Ruby Pearl. It was with Ruby that George Spahn decided to purchase the Ranch property while Ruby helped maintain it. They began renting it to the movie industry for filming old Westerns;  many of the old television shows of the early 50s, 60s and 70s such as Bonanza, The Lone Ranger, and Zorro where all filmed there as it was turned into a replica of an old western time period.

The Ranch was 55-acres in size and located at 12000 Santa Susana Pass Road in Chatsworth, California which is now Santa Susana Pass State Historic Park. From 1968 to 1969 the ranch was home to just about any stragglers Spahn could get to stay and take care of the property, including the Manson family clan.

George Spahn was 80 years old and going blind by the time the Manson Family arrived. Most of the work on the ranch consisted of cooking cleaning and taking care of the Spahn’s horses which were an additional source of income for the senior citizen.

Some of the Manson girls also tended to old Spahn’s sexual desires, especially, Lynette Fromme who’s primary responsibility was to take care of the old man around the clock. George eventually nicknamed Lynette “Squeaky” from the high-pitched squeals she would make when George ran his hands up her legs. According to Charles Watson, old George was also responsible for Watson’s nickname “Tex” which Spahn gave him due to Charles’ Texas accent.

In 1970 a fire destroyed all of the Ranch’s film sets and structures and George moved to Hollywood. Despite George Spahn allowing the Manson Family to live on the Ranch including the August 1969 raid that took place there, on his own property, he was never charged with their stolen property hidden at the ranch or in connection to any of the Family’s other crimes.

George was still married to his wife, Martha Greenholts when he passed away on September 22, 1974 at age 85. He died of natural causes in Van Nuys, Los Angeles, California, at Sherwood Convalescent Hospital.