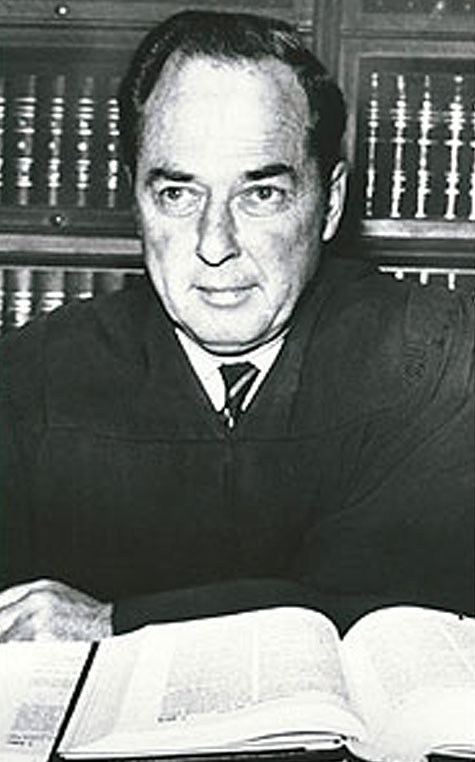 Charles Herman Older, born on September 29, 1917 in Hanford, California, was the no nonsense judge in the Charles Manson murder trial.

Older earned a degree in political science from the University of California Los Angeles in 1939 and later graduated from University of Southern California law school. He died on June 17, 2006 at the age of 88 of complications from a fall in his home in West Los Angeles.

Once a World War II fighter ace, Older found himself the ringmaster of a 22-week trial that began on July 24, 1970, and seized the attention of the world as the testimony went from LSD to sex and even unspeakable violence.

The trial spun from dramatic to ridiculous to frightening, with defendant Charles Manson carving an “X” on his forehead and altering it over time until it became a swastika. Other defendants, Patricia Krenwinkel, Leslie Van Houten and Susan Atkins, all copied him. At times, they chanted rhythmically, occasionally in Latin.

Several times, Judge Older banished the defendants from the courtroom for “raucous” behavior and set up a monitor system so they could watch from nearby cells.

On Oct. 5, 1970, Charles Manson jumped headfirst from the defense table toward the judge’s bench. After a husky deputy sheriff threw himself across the table to subdue him, Mr. Manson snarled,

“In the name of Christian justice, someone should cut your head off.”

Throughout the trial, Judge Older spoke so softly that people strained to hear him. His rulings were usually a simple “sustained” or “denied.” Sessions began at the appointed hour, on the dot. “He presided over the trial in a very firm, dignified way, and he tried to be fair to both sides, with no preexisting bias,” said Vincent Bugliosi, the prosecutor in the Manson trial.

After graduating from UCLA in 1939, Older joined the Marine Corps Reserve but later resigned his commission and joined the Flying Tigers, a covert group of American pilots recruited by Claire Lee Chennault to fly for the Chinese government in its war with Japan.

Chennault “was a hard-bitten character who knew what he was there for and how to beat the Japanese,” Older recalled in a 1991 Times article. “I can’t recall anybody who I would rather have as our group leader than Chennault.”

According to his family, Older had more than 18 enemy kills, and was the third highest-scoring Flying Tiger ace. Later, Older served as a major in the Army Air Forces, fighting in the China-Burma Theater.

In 1952, after serving in the Korean War, he received his law degree from USC and, in 1967, then Governor Ronald Reagan appointed Older to the bench.