Prints, Clothing, Blood, and Mistakes at the Scene (Out of respect for victims, this site will not include gruesome images of the murder scene). 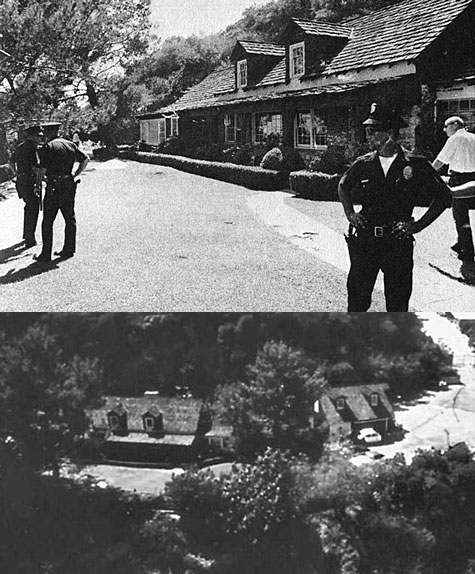 Officer Granado obtained forty-five blood samples from the Tate scene (above) and failed to run sub-types on twenty-one of those. Two days later at the LaBianca scene he would again take no sub-types.

The gun used in the murders was discovered by a boy in Los Angles about two weeks after the murders. “The boy was careful not to touch the revolver to protect fingerprints. The police smudged it up and filed it away, the chambers of the weapon containing seven spent shells and two live bullets”.

Although the fingerprints on the gun were obliterated by police officials, forensics professionals were able to match a print from the front door of the Tate residence and one lifted from the frame on the inside door of Sharon Tate’s bedroom to two of the suspects. These prints would become an important key to the prosecution’s case.

In addition to eradicating fingerprints, officers made several other procedural mistakes. For example, pieces of a gun grip that were first seen near the entryway ended up under a chair in the living room. According to the official LAPD report: “They were apparently kicked under the chair by one of the original officers on the scene.”

On December 16, 1969, these pieces would be matched to the gun that had been in police custody since September 10, 1969 when the Los Angles boy had found it in his yard. Police probably would never have made the connection if the boy’s father, having heard about the caliber of gun used in the murders, had not insisted that the police check it out. Since guns and other property are routinely disposed of after a period of time, prosecutors were rather lucky that the gun was still around.

Officers were also unable to locate any of the knives or bloody clothing from the murders. One of the Charles Manson accomplices (Susan Atkins) divulged to a cell mate her involvement in the crimes, including a suggestion of the location where these items were thrown from the vehicle. A television news crew set out to find them. They used statements made by Atkins, such as “mountain on one side” and “ravine on the other” to guide their search. On December 15, 1969, police found the discarded clothing of the defendants.

Forensic professionals were lacking in the performance of their duties. One in particular, Officer Joe Granado, a forensic chemist assigned to both cases, failed to note or sample blood spatters around the bushes where someone had apparently fallen at the Tate residence.

Granado obtained forty-five blood samples from the Tate scene and he failed to run sub-types on twenty-one of those. Two days later at the LaBianca scene he would take no sub-types which would cause major complications later in the trial. On the walkway leading to the Tate residence were several large pools of blood and Granado only took a sample from one of these pools, “presuming, he later said, all were the same“.

Unfortunately, officers at the scene tracked blood from inside the residence onto the front porch and walkway and back again, which compounded the problems. This made it necessary to interview all the individuals who had been at the scene about the shoes they had worn that day. Although all these mistakes were made, officials were still able to put together enough evidence for trial.