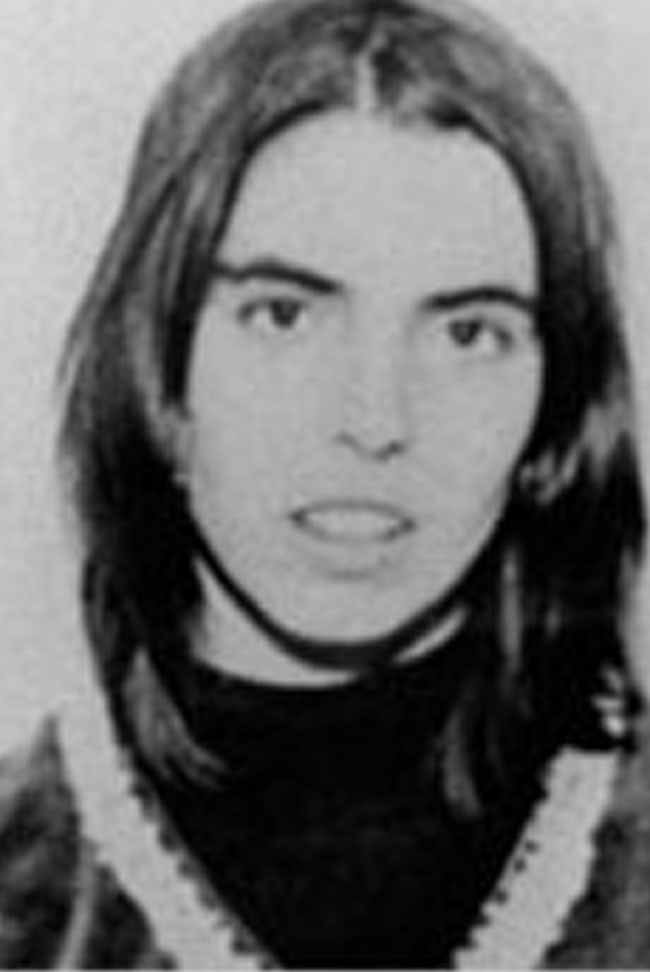 Maria Alonzo was born on August 24, 1952 in California. She became a member of the Manson Family after meeting Susan “Sadie” Atkins in jail at Sybil Brand Institute for Woman where she was seduced by the thought of meeting God himself. It was Sadie who gave Maria Alonzo her new name of Crystal Palace.

Alonzo was arrested two times. First, while trying to smuggle a switchblade knife into the Stockton prison; she was subsequently released. Second on a kidnapping charge of a foreign official who she planned to hold for $250,000 in ransom or for the release of two prisoners Garrett Brock Trapnell and Robert Bernard Hedberg; the charges were reduced and she served six months.

Alonzo was one of many girls to carve an “X” in her forehead and picket for Charles Manson outside the LA County Courthouse during his murder trial. According to Bill Siddons, best known for managing the music group “The Doors” from 1968 to 1972, he picked up Alonzo while she was hitchhiking from West Hollywood and dropped her off in Hawthorn at a club where she told him she worked as a stripper.

Soon after the Tate Labianca trials concluded with convictions, what was left of the Family began to slowly break up. Maria then met and married William or “Billy” Goucher in 1973 in San Juaquin County, according to marriage records. Goucher was believed to have been involved with the Arian Brotherhood, a neo-Nazi and white supremacist group.

William Goucher and Maria Alonzo wound up staying with a group of couples including James “Spider” Craig and  Priscilla “Tuffy” Cooper, Nancy Pitman and Michael Lee Monfort, AKA “Red Eye”, and  James T. Willett and his wife, Lauren Willett, with their daughter, Heidi Willett. The group wandered California committing various crimes until they all found themselves in jail related to the murder of James T. Willett and his wife, Lauren Willett. James Willett was a former Vietnam combat veteran, who mainly wound up with the group based on his difficulty to reintegrate himself into society after his military time.

When the group somehow found out that their cohort James was considering turning them all in as he was getting tired of their life of crime, Red Eye, Spider, and Billy immediately killed him, burned his decapitated body and buried him in the woods. Initially telling his wife that James ran off and left, a few weeks later they added her to their killing spree. She was buried in a basement the group was staying in. When all was said and done, police had tracked the group down and they were all arrested. The young daughter, Heidi Willett, was found unharmed and turned over to a Dependent Children’s Home.

The book “Helter Skelter” states the following about the murder of the Willett’s:

“The motive for the two murders is not known. It is known that the Willetts had been associated with the Manson Family for at least a year, and possibly longer. Police surmised that Lauren Willett was killed after learning of the murder of her husband, to keep her from going to the police. As for the murder of James Willett, the official police theory is that Willett himself may have been about to inform about the robberies the group had committed.”

After serving her time in prison, Maria Alonzo, then Maria Goucher, divorced her husband William in 1978. Records show that she died on December 18, 1985 in Riverside County CA.