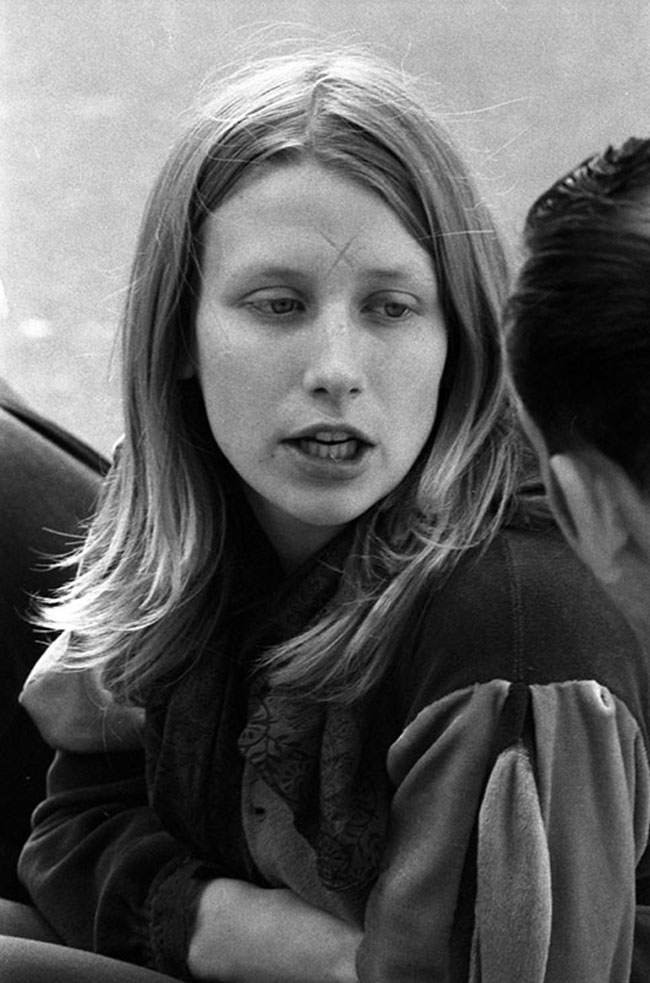 Catherine Gillies was a member of the Manson Family

Catherine Gillies was born on August 2, 1949 in Santa Cruz, California. She joined the Manson family sometime in 1968 after she had been following around a Canadian-American rock called Buffalo Springfield. She was arrested in both the Spahn Ranch and Barker Ranch raids.

Catherine was and remains thought of as one of Manson’s most devoted followers having said she would have participated in the Tate and LaBianca killings if only she was permitted to do so; Charles Manson himself told her she was not needed and to stay behind. Catherine was most often seen squatting on the sidewalks outside the Los Angeles Hall of Justice at the corner of Temple and North Broadway during the trial with her carved “X” front and center of her shaved forehead. When Gillies was eventually called on to testify in Judge Older’s court proceedings during the final days of the penalty phase she stated:

“I would have gone with them [on the two nights of murder], but didn’t only because they didn’t need me,”

Manson was not present during this testimony as he had been disruptive in the courtroom and refused to remain silent that day. Catherine went on to tell the court that that the murders were copycat killings committed in an attempt to get Bobby Beausoleil out of jail; she further claimed Charlie had nothing to do with the murders.

Catherine, or Capistrano as George Spahn called her, is also directly related to the Family’s use of the Barker Ranch as her grandparents, Bill and Barbara Myers owned an isolated Ranch called Myers Ranch which was just a half mile away from Barker Ranch, where the Family stayed starting in November 1968. The Myers lived on the ranch until 1960 when they relocated to Fresno so that their children could have a better life.

Catherine had convinced her grandmother to let her and a “few friends” stay at the Myers Ranch; little did her grandmother know, Catherine was intending to bring the entire Family which she did, however, since the buildings at the nearby Barker Ranch were in better condition, the Family befriended the owner Arlene Barker and obtained permission to use the property on a temporary basis. Manson gave Arlene Barker one of the Beach Boys gold records he obtained from Dennis Wilson as a present. This led the Family to stay at Barker Ranch, rather than Myers Ranch, however the Family lived at both Barker and Myers on-and-off throughout 1968 and 1969.

Manson wound up so intrigued with the Ranch location that he convinced Catherine into a murder plot so that the Family could obtain at least Myers as inheritance after her grandmother’s untimely death. If not for a flat-tire on their way to kill her, Barbara Myers would have died at the hands of her granddaughter; they aborted the mission after the flat tire. Myers Ranch eventually burned down in 1999 and was completely reconstructed. Today the remnants of both ranches belong to National Park Service.

Burning Gillies’s position in the Family’s circle of murder even further, Catherine was also found to be present during the suspicious death, an alleged suicide by Russian roulette, of John “Zero” Haught on November 5th, 1969 at the Home of Mark Ross located at 28 Clubhouse Avenue in Venice, California. According to a witness statement from Madaline Joan Cottage “Little Patty”, she and Zero were in bed, when he picked up a .22 Caliber revolver, and stated “Oh look a gun, it has one bullet in it”, he then spun the cylinder, placed the muzzle against his head, and shot himself.

After the family broke apart, Gillies reportedly joined a motorcycle gang, got married to a man named David “Coyote” Barton, and the couple had four children before divorcing. She is said to have never completely denounced the Family and it is reported that to this day Catherine remains upset that she was not chosen to join-in on the two nights of murder, and that she believes the events of 1969 were justified.