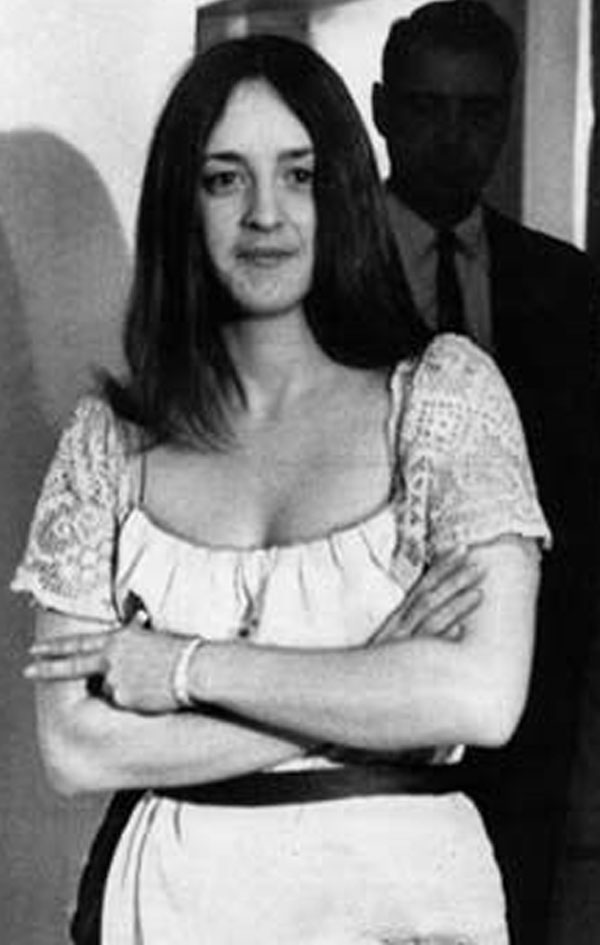 As a young teen, Susan Atkins sang in her church choir in San Jose, California and nursed her mother, who was dying of cancer. After her mother’s death, however, her life went seriously off course. She fought with her father, dropped out of high school, and moved to San Francisco where she became a topless dancer, hustler, and gun moll.

“[Manson] gave me the faith in myself to be able to know that I am a women…. I gave myself to him.”

Atkins said there was “no limit” to what she would do for “the only complete man I have ever met.” To Atkins, Manson “represented a Jesus Christ-like person.”

Atkins spent a year-and-a-half traveling around the Southwest with other Manson Family members on an old school bus, taking lots of LSD, and practicing free love with Manson Family members of both sexes. In 1968, she bore a child, who Manson helped deliver, named Zezozose Zadfrack Glutz. Atkins moved into the Family’s Spahn Ranch in 1969. On August 8 of that year, she obeyed Manson’s order to join in the what would be the bloody attack that left five dead at the home of actress Sharon Tate. Atkins later admitted stabbing Voytek Frykowski and holding down Tate while Tex Watson repeatedly stabbed her to death. She also said she wrote “PIG” using Tate’s blood on a door of the residence.

While Sharon Tate pleaded for her life and the life of her unborn child trial testimony detailed the horrific statement Atkins made to Tate in her last moments alive:

While being held on other charges in 1969, Atkins explained her decision to participate in the massacre at the Tate residence to another inmate, Virginia Graham:

“You have to have real love in your heart to do this for people.” – Susan Atkins

The LAPD proposed granting Atkins immunity in return for her testimony that could convict Manson and other Family members. Prosecutor Vincent Bugliosi objected, saying “We don’t give that gal anything!” In the end, the prosecution offered not to seek the death penalty in return for her trial testimony–an offer which Atkins, after testifying before the Grand Jury, refused.

Atkins, then twenty-two, was convicted of first-degree murder and sentenced to death in 1970. Her sentence was reduced to life imprisonment when the California Supreme Court declared the state’s death penalty unconstitutional.

In September 1974, Atkins said her cell door opened and “a brilliant light poured over her.” Describing the experience in her 1977 book Child of Satan, Child of God, Atkins said she believed the light was Jesus, telling her she had been forgiven. Atkins Died on September 24, 2009, at the Central California Women’s Facility, Chowchilla, California.

Discuss this topic in the new Susan Atkins forum.