Leslie Van Houten is serving life for the LaBianca murders 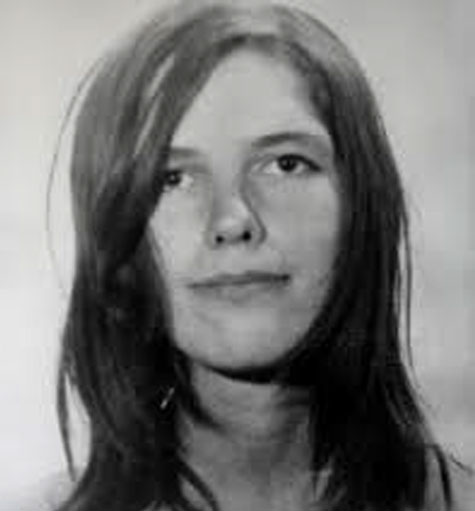 Leslie Van Houten was born on August 23, 1949 in Los Angeles, California. By all accounts, her auctioneer father and schoolteacher mother were doting, altruistic parents who did everything they could for young Leslie and her brother Paul. Their kindness went even further when they adopted two Korean orphans years later.

However, when Jane and Paul Van Houten divorced, Leslie took it extremely hard and she started going down a destructive path. She began dating classmate Robert Mackie and became sexually active at age fourteen. Leslie got pregnant that same year and had an abortion. She also began dropping acid with her boyfriend at least once a week.

Upon graduating from Monrovia High School in 1967, she enrolled in secretarial school. During this period Leslie became a self-proclaimed “nun” in the Self-Realization Fellowship, a sect that focused on spiritual betterment through yoga techniques.

Leslie soon tired of the nun thing and at eighteen began wandering around California, seeking fulfillment in sex and drugs. Her travels led her to cross paths with handsome musician Bobby Beausoleil in 1968. The two soon became lovers but Leslie still felt empty inside. When she heard of Manson through Beausoleil friend Catherine Share (or Family member Paul Watkins, according to his book) she went to go meet the man in person. It didn’t take long for her to become a believer.

Despite her big smile and model-good looks, Leslie remained somewhat distant from Manson. She was never one of his favorites. Even Charlie had said that she was more “Tex’s girl” than his. Perhaps this led Leslie to try to “prove herself” by accompanying Manson and several others on a second night of murder. The LaBianca murders followed the Tate Murders of August 9th. Around two in the morning Manson dropped off Leslie, Tex Watson and Patricia Krenwinkel at the home of grocery chain owner Leno LaBianca and wife Rosemary.

Once inside the house Van Houten and Krenwinkel took 38-year-old Rosemary into the master bedroom. They put a pillowcase over her head and wrapped an electrical cord around her neck. Leslie then held the petrified woman down. She watched as Krenwinkel and then Watson stabbed her numerous times. After Watson was done, he told Leslie to stab the woman and Van Houten stabbed her sixteen times in the buttock area (possibly once in the back). Van Houten has maintained that she thought Mrs. LaBianca was already dead at the time but was not sure.

Van Houten dismissed her first attorney, Donald Barnett for crossing Manson. Her second lawyer, Marvin Part, wanted to show that Van Houten was “insane in a way that is almost science fiction.” Part saw her crime as influenced by LSD and Charles Manson. However, Van Houten saw it differently: “I was influenced by the war in Viet Nam and TV.” At Manson’s urging, Van Houten fired Part and the court appointed a third attorney, Ronald Hughes. Days after Hughes pursued a strategy that ran counter to Manson’s designs, he died in a mysterious accident. No one has ever been charged with his murder.

A state appellate court overturned Van Houten’s first-degreee murder conviction in 1976 on the grounds that Judge Older erred in not granting Van Houten’s motion for a mistrial following the disappearance of attorney Ronald Hughes. In her first re-trial, the jury was unable to reach a verdict. Released on bond for a few months, Van Houten lived with a former writer for the Christian Science Monitor. In 1978, the State tried her a third time. The jury convicted her of first-degree murder after rejecting her defense of diminished capacity as the result of prolonged use of hallucinogenic drugs.

Since then she has been more or less a model prisoner, with her one downfall being a short-lived jailhouse marriage to an ex-con who allegedly tried to break her out of prison (though Van Houten probably knew nothing of his plan).

The California parole board has recommended her for release three times as of 2020. In 2019 Governor Newsom again reversed the board’s decision.

Of all of the Manson Family members serving life sentences, many believe that Van Houten stands the best chance of release.

For deeper insight into Leslie Van Houten’s crimes and her life in prison, read Nikki Meredith’s book The Manson Women and Me.

Discuss this topic in the new Leslie Van Houten forum.